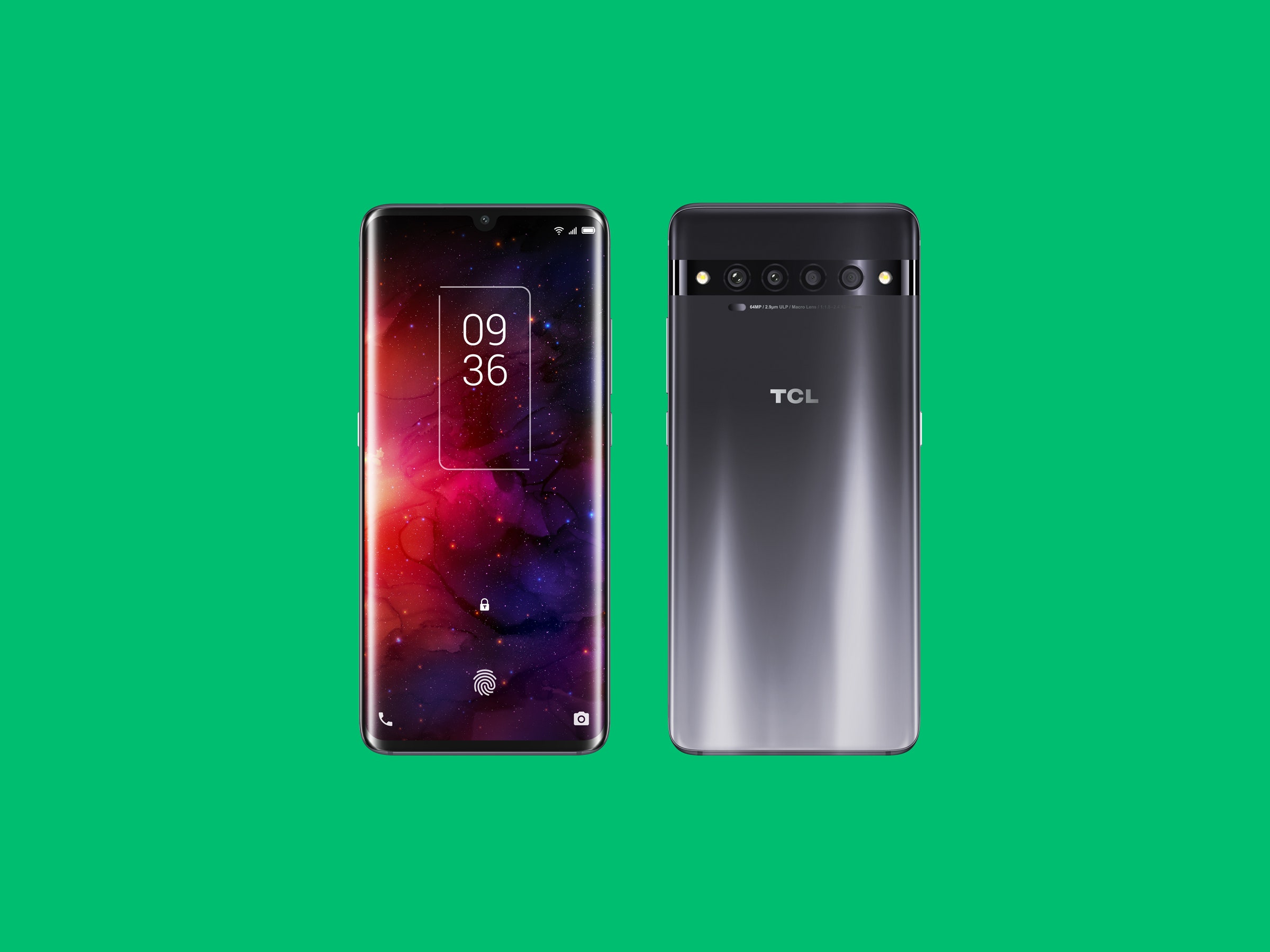 I’ve been testing a lot of budget phones lately. You’d think my favorites would come from established brands like Samsung and Motorola, right? Not quite. The phones I’ve really enjoyed using come from a brand you may not associate with mobile devices: TCL, a company better known in the US for making affordable televisions.

TCL has been making household appliances since 1981, and you may be surprised to learn it has been quietly manufacturing phones for years under different brand names that it either owns or has licensedâ€”names like Alcatel, BlackBerry, and more recently, Palm. But the new TCL 10 Pro ($450) and 10L ($250) are the first TCL-branded smartphones to be sold in the US.

Competition is fierce for phones under $500â€”especially now, with options like the new iPhone SE, the Google Pixel 3A, and the upcoming Pixel 4A, which we expect to see this summer. But TCL has managed to carve out a comfortable home on a shelf full of smartphone pioneers, and that’s a very promising start.

Despite what their names would suggest, the TCL 10 Pro and 10L have very little in common. Both pack headphone jacks and Micro SD card slots, and their displays share the same 2340 x 1080-pixel resolutions. However, the screen types, camera systems, and internal specs all differ between the two handsets. It’s difficult to say you should buy one over the other, because each model serves a different group of people.

The $450 TCL 10 Pro is the more well-rounded phone of the pair. The Snapdragon 675 chip inside is fast, the four-camera system is decent, the 6.47-inch OLED screen is bright enough to be seen in sunny conditions, and the 4,500-mAh battery typically lasts a full day with heavy use. It also feels like the more premium device, with matte glass on the back, curved edges on the front, and a sturdy metal frame around. Plus, you get 128 GB of onboard storage.

If your budget is tighter, the $250 TCL 10L is a good buy. It’s peppy thanks to the Snapdragon 665 processor. Like the Pro model, it also has four cameras, but while it snaps nice photos during the day, its low-light images are filled with digital noise you won’t find in the low-light photos taken with the pricier model. The 6.53-inch LCD screen is dim outdoors, but the phone’s 4,000-mAh power bank often lasted close to two days for me. The 10L has a plastic back and the base model has only 64 GB of storage, though a 128 GB model is available.

Both these phones are available unlocked, but unfortunately, they only work on GSM networks like AT&T and T-Mobile. TCL tells me you may be able to get them to work on Verizon, but text messages may be a little wonky. (For those on Sprint about to become T-Mobile users, the newly merged company is soon going to begin using a GSM-only portfolio for new customers. If you upgrade, try to buy a GSM phone.)

What really makes these two TCL phones stand out from others in the cheap end of the Android pool is performance. On phones like the Samsung Galaxy A51 ($400) and Motorola’s Moto G Stylus ($300) and G Power ($250), apps and games run fine, but there wasn’t a day where I didn’t see sputters or slowdowns. Such frequent bouts of sluggishness makes using those phones feel like a chore (though I should say that performance on budget phones has come a long way in just a few years).

My time with the 10 Pro and 10L have been a whole lot more positive. They run smoothly, with barely any stutters whatsoever. This might be confusing when you consider that the 10L has the same processor as the Moto phones, but it’s likely the 6 GB of RAM inside helps the TCL phones run a little faster. In benchmark tests, the 10 Pro handily beats its peers like the Galaxy A51 and the Google Pixel 3A, and the 10L sits just above the two Motorola devices.

Where these two handsets fall a little short is in their software. At first glance, things look a little like the heavy-handed old days when bloated manufacturer skins bogged down the Android operating system. But TCL’s version of Android is actually rather lightweight and not too shabby. You just need to spend several minutes going through the settings to get things looking better, something you won’t need to do on Moto phones.

For example, I had to ask a TCL representative how to disable a persistent “Feedback” notification that sat in my drawer all the time. And by default, photos come with a “TCL” watermark. I immediately turned that off, and I have since learned that the watermark will be disabled by default after an upcoming software update.

I do like some of TCL’s additions, like the extra button on the side of the phones that you can configure to launch three apps or tools of your own choosing. For me, a tap opens Google Assistant, a double-tap triggers the flashlight, and a long-press takes a screenshot.

Unfortunately, TCL is only promising one Android version upgrade with these phones. They’ll get Android 11 later this year and “consistent” security updates for a while, but there’s no guarantee the devices will get Android 12 in 2021, which is incredibly disappointing. Google gives its Pixel phones three years of software support, and the iPhone SE will likely continue to get updates from Apple for four to five years.

Whenever there’s a new player in the phone market, the camera is often the weak spot. It usually takes a company years of tweaking the image processing software to get things right (looking at you, Essential and Razer). With TCL, color me surprised. Well, maybe take it easy on the color. Photos from these phones are often a little too saturated for my liking, but otherwise, they’re decent.

The results don’t look as over-sharpened as some of the shots from the Samsung Galaxy A51, though the white balance can be a little off sometimes. The quality of portrait mode in good lighting, especially from the 10L, is impressive; the macro lenses do a decent job of letting you take super close-up photos of subjects; and the ultrawide lenses are solid, though I’ve noticed some lens distortion creeps in around the edges of some images.

The TCL 10 Pro shines after dark with its night mode. Yes, you need to hold very still while it snaps a few images and stitches them together, but the photos are often a tad more detailed and less murky than results from the Galaxy A51. Plus, there’s plenty more color. Too much color sometimes, but I’d take these shots over the muted and grainier images from Samsung’s phone.

It’s unfortunate, then, that the cheaper 10L does not come with the dedicated night mode found on the Pro model. The photos the 10L takes at night are structurally soundâ€”there’s good detail, and colors are OKâ€”there’s just no processing in place to remove noise, so you’ll always end up with a terribly grainy photo. I wouldn’t recommend the lower-priced model if you find yourself frequently taking photos at night. The $250 Moto G Power also doesn’t have a night mode, and while its photos are nowhere near as noisy, they’re frequently blurry and often just as unusable.

As for that low-light video camera on the 10 Pro? It’s actually a great way to get shareable footage when you’re in ultra-dark conditions. Just know that the quality isn’t going to be exemplary.

Which Should You Get?

If your budget is tight, the TCL 10L is a solid phone to buy. I’d choose it over the Moto G Power (unless you really want 3-day battery life), but if you can spend the extra $50, you may be happier with the Moto G Stylus, which can at least take some usable low-light shots. As much as I take photos, I’d prefer to have smooth performance across all of the things I use a phone for, so the TCL would be my pick.

The 10 Pro, my favorite between the two TCL models, is a little harder to quickly recommend because of the competition and its slightly higher price. It’s a solid phone in its own right, but you should wait to see what Google’s Pixel 4A is going to be like (it should launch soon). There’s a strong chance it will have a better camera, similar performance, and better software than the TCL 10 Pro. Or, if you can spend a little more, get the OnePlus 7T for $500. It’s got flagship-grade power, a versatile camera system, and a fantastic display.

I’ve had a more enjoyable time using these two TCL phones over other new budget phones, and the main reason is the great performance. Seeing the animated user interface stuttering and jerking around while simply switching between Google Maps and the camera app gets old fast. It’s 2020. Budget phones can do better, and TCL proves that.